On October 1, Ontario’s adult minimum wage became $15.50. [1] By fighting together you, and others like you, helped win legislation in 2014 that ensures the minimum wage is indexed annually according to the Consumer Price Index. This is an important win that will increase the wage floor for all workers and extend cost-of-living adjustments to larger cohorts each year.

But with inflation at a record high, workers need a much higher base wage to cope with the affordability crisis. That’s why we’re fighting for $20.

Here are 3 actions you can take to support the fight for a $20 minimum wage:

Minimum-wage earners have been hardest hit by the current affordability crisis.

First, we were hit with the 2019 wage cut when Doug Ford cancelled the scheduled $15 minimum wage. That cut permanently reduced workers’ earnings. Now, as a result of the COVID pandemic, war, and climate change, we’re facing record-breaking price increases for necessities like food, shelter and transportation.

Workers are at a breaking point.

According to the latest Statistics Canada data, the price of groceries has accelerated by a staggering 11% – the fastest rate since 1981. [2] People were already appalled by the record profits raked in by corporations like Loblaws, Walmart, and Amazon during the COVID-19 pandemic. Everyone watched these companies cancel pandemic pay and refuse to implement basic protections like permanent, employer-paid sick days.

As Deena Ladd from the Workers’ Action Centre explains:

“The way to fight the affordability crisis is to legislate a $20 minimum wage and improve employment standards. We are proud of winning legislation back in 2014 that delivers annual cost-of-living adjustments. But the base rate is far too low and it's clear that $15.50 won’t pay the bills. It’s time for a $20 minimum wage for all with no exclusions.”

Here are the facts: 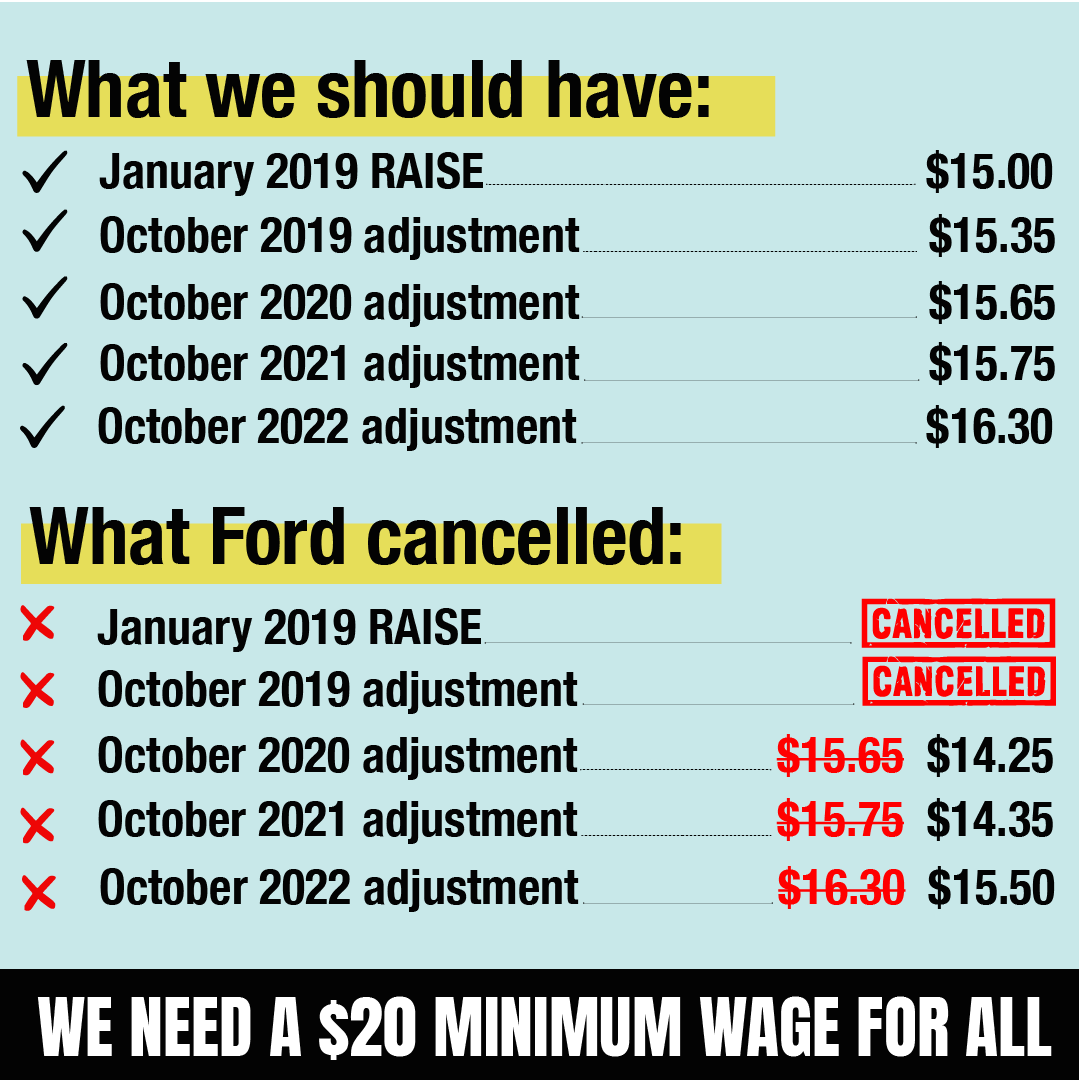 If you're a minimum wage earner, be sure to check you next pay cheque to make sure it reflects the new minimum wage rate.

But let’s not let Premier Doug Ford claim credit for following a law that we brought into being. And let’s redouble our effort to win a $20 minimum wage for everyone!

– Pam Frache on behalf of Justice for Workers

[1]  See the Ministry of Labour guide here. Not all workers earn the adult minimum wage. Students under 18 years of age who work part-time and attend school earn less and will see their wages adjusted from $14.10 to $14.60 per hour. Other workers, such as farmworkers, are excluded from minimum wage protections.