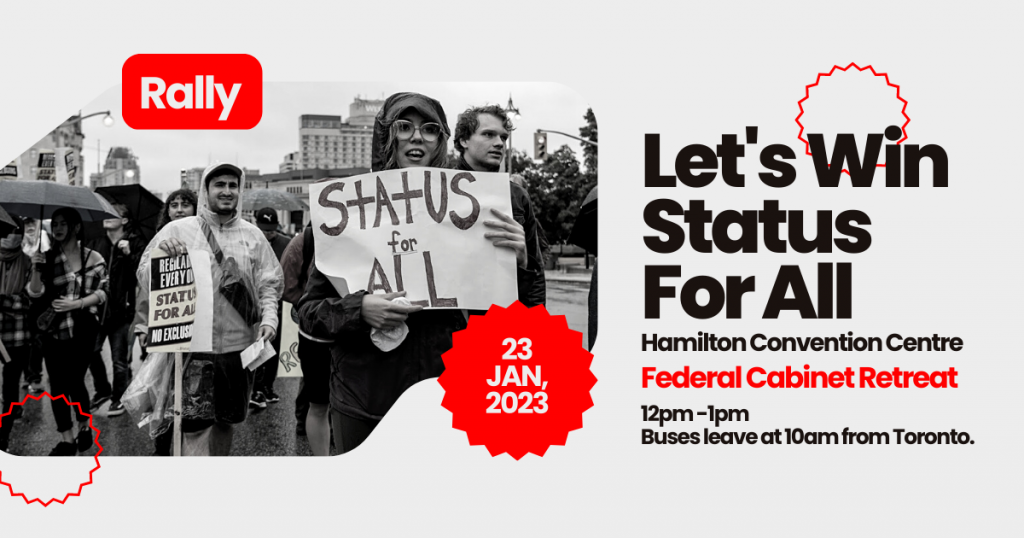 Prime Minister Trudeau and all federal Ministers are meeting in Hamilton on Monday, January 23rd for the winter Cabinet Retreat. Join us at a rally outside to call on them to keep their promise and create a historic regularization program that ensures permanent resident status for all undocumented people without exclusions. We must stop deportations. Together, let’s win #StatusForAll.

We encourage all allies to join us with signs linking struggles to #StatusForAll. To endorse, please email [email protected]

This week is crucial. Prime Minister Trudeau and all federal Ministers are meeting in Hamilton from January 23rd to 25th to plan out their priorities for the year. If you act now, we can win historic immigration changes. If all the Ministers at the meeting support regularization, then Cabinet can create an uncapped program through which all undocumented people and their families can apply for permanent residence as early as February. If the Ministers aren’t in full support then they will schedule more meetings for discussion. Delays mean exploitation, deportation, and even death. Two migrants died this Christmas – an undocumented migrant in an immigration prison in BC, and Fritznel Richard, a Haitian refugee crossing into the US after being unable to get a work permit in Montreal. We must win #StatusForAll now. Make a phone call, send an email and put up posters, let’s win!