This week, Premier Doug Ford finally relented and announced he will restore the $15 minimum wage he cancelled back in 2018. We hope you feel proud of your role in forcing this anti-worker Premier to reverse course. This about-face is a vindication of everything we have done together: When we are united, we can make gains even under the most hostile governments.

But in the time it’s taken Ford to admit his mistake, our wages have fallen behind. When Ford cancelled our $15 minimum wage, he also suspended for 2 years the yearly cost of living adjustments.

In doing so, Ford transferred billions of dollars from workers right into the pockets of Amazon, Walmart, Loblaws, and other corporations who made record profit during the pandemic. And during all this, the pandemic has created supply shortages which are causing the price of basic household goods to skyrocket.

It will be seven years since workers first demanded $15 an hour when the $15 minimum wage takes effect in January 2022. That’s why a $15 minimum wage doesn’t cut. We need at least $20 an hour to survive! 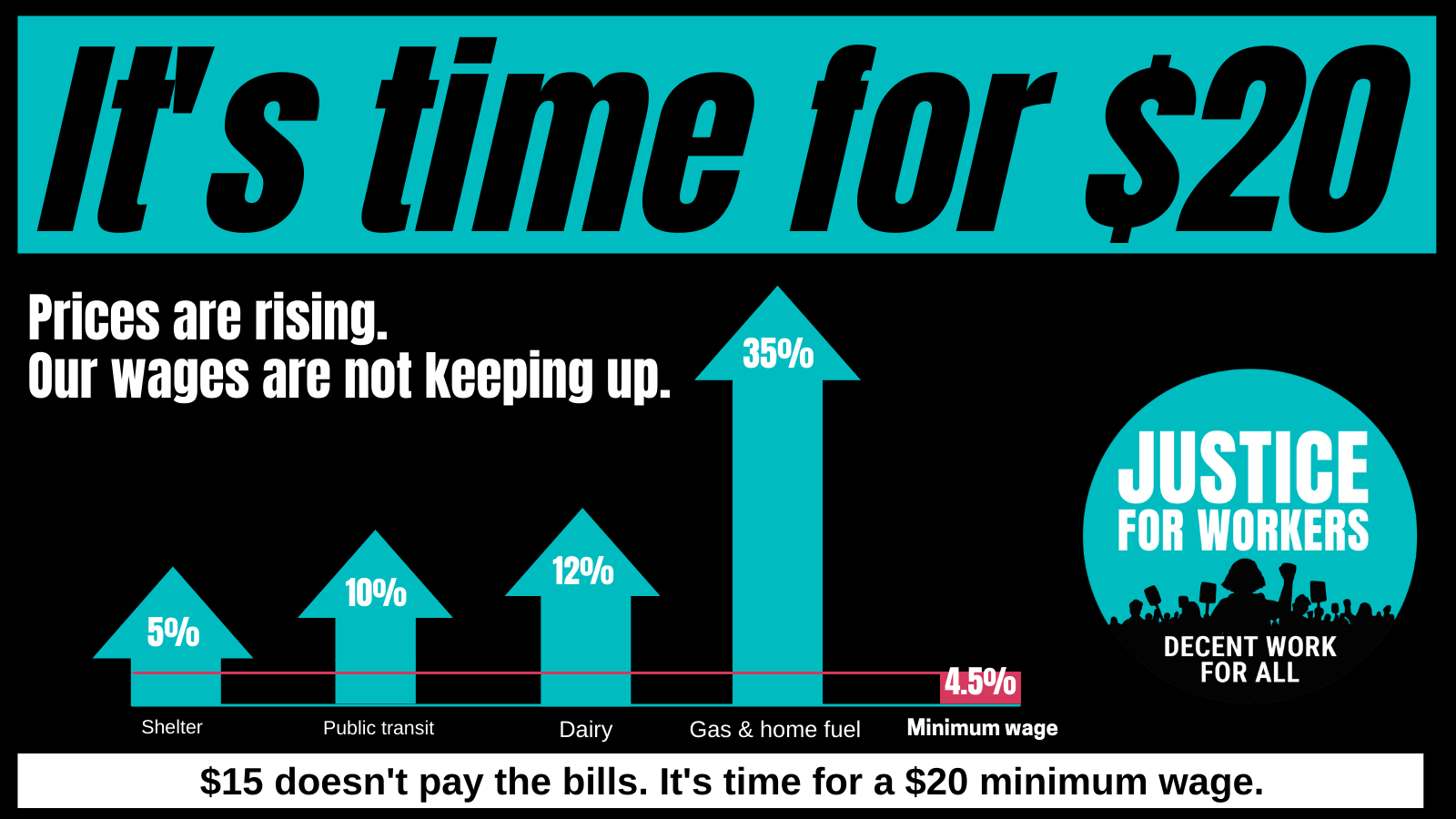 $20/hour minimum wage for all. No exemptions.

As part of his minimum-wage announcement, Premier Ford promised to scrap the sub-minimum wage rate for liquor servers. This will increase liquor servers’ wages from $12.55 to $15.00, a pay hike of almost 20%. This is a huge step forward in our ongoing fight for equal pay. But our work isn’t done. Migrant workers are still exempted from minimum wage laws and students under the age of 18 are will still be paid less than their over-18 coworkers.

We must keep fighting until everyone earns at least $20 an hour. That’s why we need YOU at our next decent work organizing meeting on Tuesday, November 16 at 7:00 pm EST. Will you be there?

NDP MPP Peggy Sattler’s private members’ Bill 8 for 10 paid sick days (plus 14 more days during public health outbreaks) will be debated on November 18 and the vote will take place November 22. We know the Ontario Liberals will be supporting Bill 8 so if Premier Ford and Labour Minister Monte McNaughton are serious about “working for workers,” the Conservative caucus must unanimously vote YES to implement Bill 8 without delay.

If we can force a Conservative Premier to reverse course on the minimum wage, we can convince our Prime Minister and federal Finance Minister to change their minds on cancelling the Canada Recovery Benefit. Eliminating CRB will not address the real source of the labour shortage, which is caused by transportation bottlenecks and an exodus of workers from jobs with poverty wages, unsafe working conditions, and unstable hours.

It's not too late for Justin Trudeau and Chrystia Freeland to do the right thing. 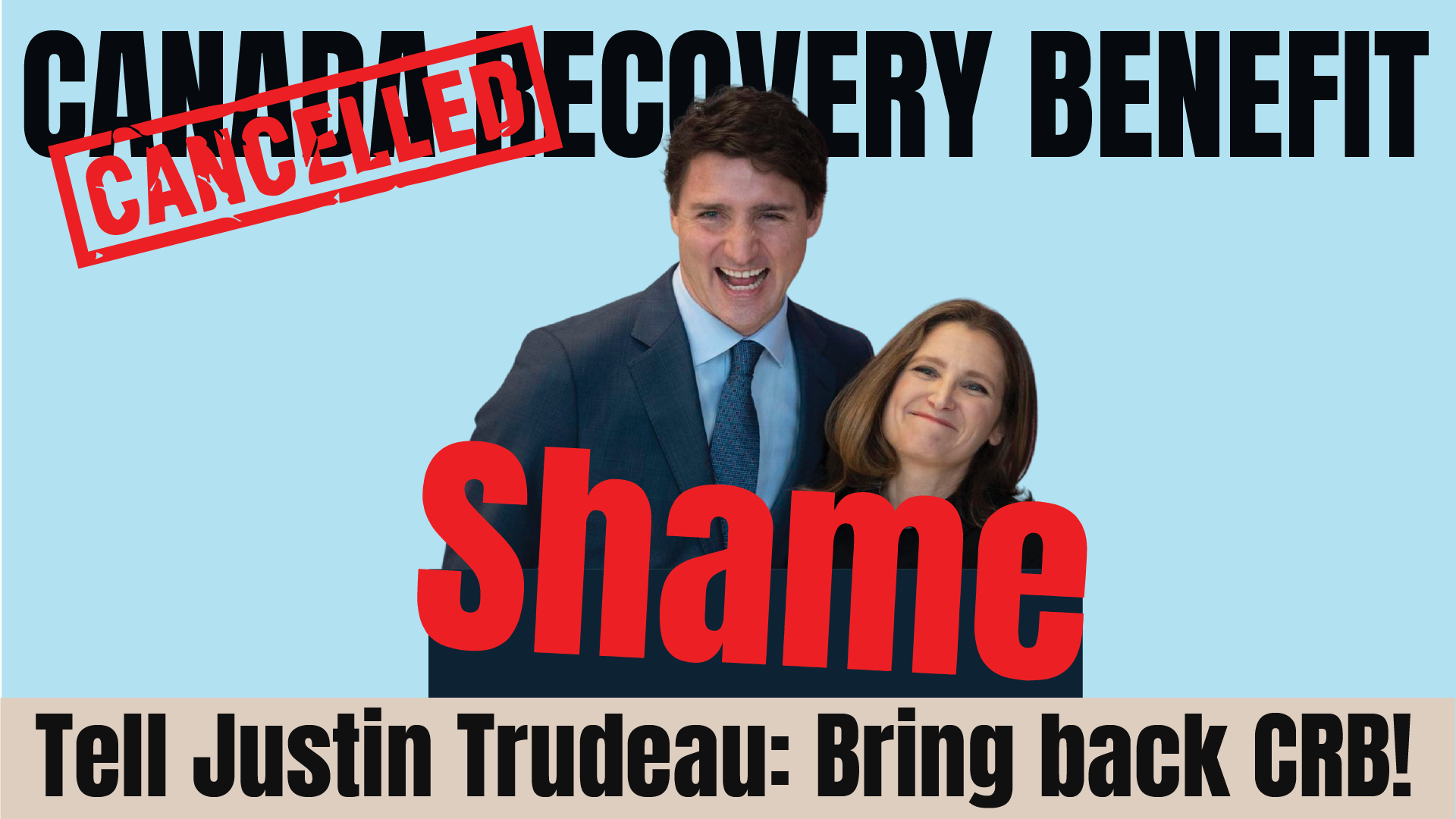 November 10th: Phone Zap to bring back the CRB and fix EI!

On November 10 at 12:30 EST, we are joining forces with Campaign 2000; the Good Jobs for All coalition; the Steelworkers Toronto Area Council; and UNIFOR for a pan-Canadian Phone Zap to call on our federal representatives to bring back CRB income supports and to fix Employment Insurance for good.

Please join us for 45 minutes next Wednesday, November 10th at 12:30 pm EST (9:30 am PST and 1:30 pm AST). Every phone call and email we make will be crucial, so your participation is essential.

From paid sick days to the minimum wage, the tide is turning in favour of workers across this country. And we couldn't have done it without you!