The 55,000 members of CUPE's Ontario School Board Council of Unions (OSBCU) will be voting on the government's offer. There will be no strike on Monday, November 21.

We thank all the frontline education workers who have been standing up for students, parents, and for good jobs in our communities and wish them well as they deliberate on the contract offer.

Chronic understaffing, deferred maintenance, and low wages are at the root of today's crisis. Premier Doug Ford, Education Minister Stephen Lecce, and Labour Minister Monte McNaughton have the power and the resources to fix the crisis. But instead of hiring more staff with livable wages, the Ontario government would rather dole out billions in individual payments to parents: payments that deliver almost nothing meaningful -- or lasting -- to parents.

The latest hand-out (the so-called "Catch Up Payments") cost the education system $365 million.

This is the third time since 2020 the government has allocated hundreds of millions to individualized hand-outs, bringing the total amount squandered to a staggering $2.165 billion. [1]

As one astute observer explained: issuing a couple hundred bucks to parents is the equivalent of giving everyone a bucket of tar, rather than investing in qualified professionals to pave a whole road. It makes no financial sense and deprives the system of much-needed financial resources. Had that $2.165 billion been invested into the education system as a whole, every child and parent would have benefited from a stronger foundation for Ontario's education system and we wouldn't be in the current situation.

Let's be clear: no worker wants to be on strike. But it is the only option left when the government refuses to do it's job to make sure classes are clean, safe, and well-maintained and that there are adequate numbers of staff with decent wages so that everyone can perform to the best of their abilities. That's a winning formula for students, for our education system, and for our communities.

Let's keep painting the province purple until all education workers have a good deal! 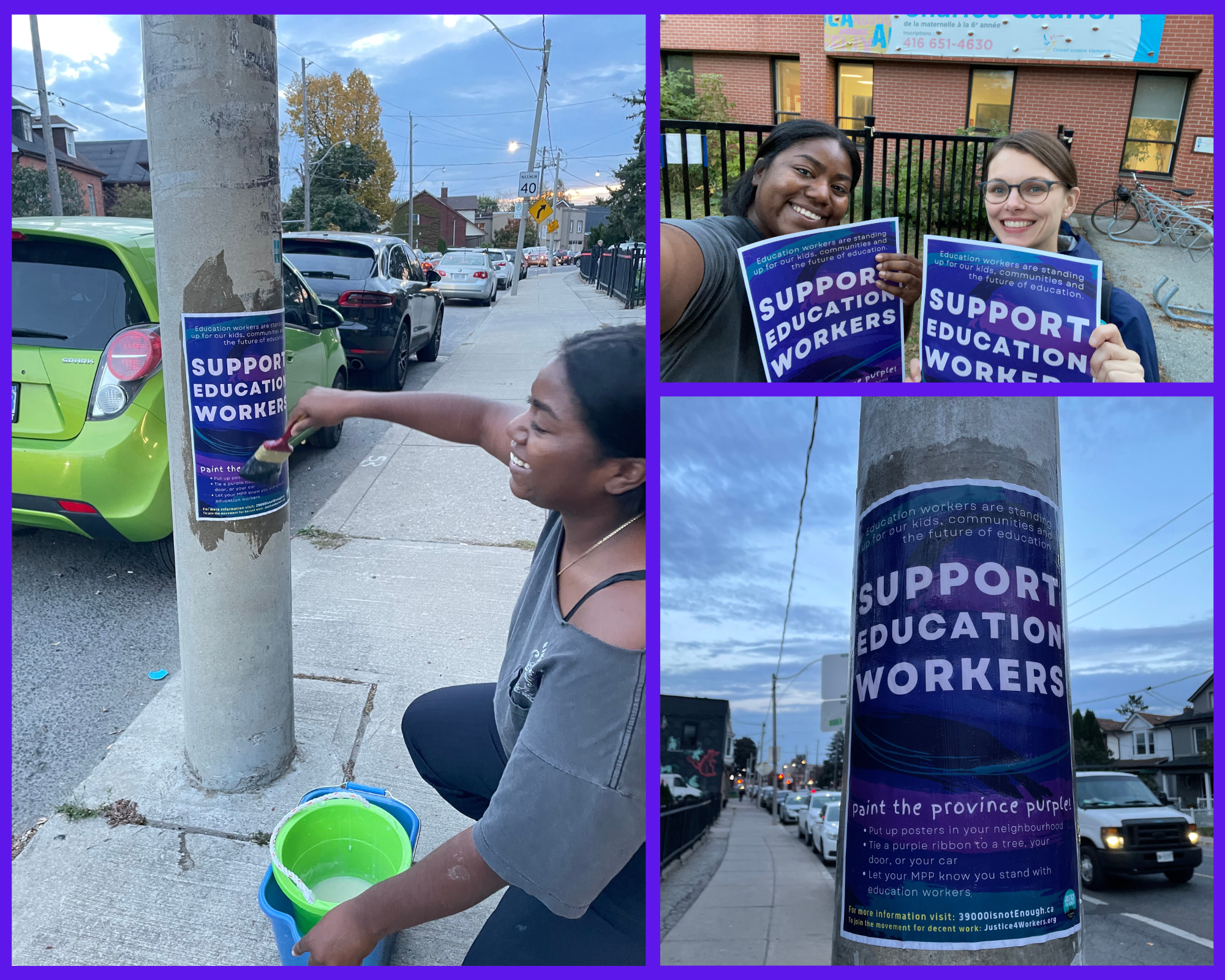 Education workers are fighting for many of the same demands we are.

55,000 school board workers are fighting for decent work. They include education assistants, library workers, administrative assistants, custodians, early childhood educators, child and youth workers, tradespeople, nutrition service workers, school safety monitors, social workers and more. These members of the Canadian Union of Public Employees-Ontario School Board Council of Unions are essential to the well-being of students and to our public education system, including the English public, English Catholic, French public and French Catholic school systems.

If education workers win, it will pave the way for the legislative changes we all need to improve working conditions for everyone.

Chronic underfunding of Ontario’s schools left our kids vulnerable when the pandemic hit. Between 2017 and 2022, per student funding actually fell by an average of $800. Poor ventilation, inadequate cleaning and overcrowded classrooms meant our schools weren’t safe for students during the pandemic. As a result, Ontario experienced more school closures than anywhere else in Canada. [2][3]

And while there is overwhelming support for employer-paid sick days for all of us, it is shocking to learn the provincial government is demanding concessions from education workers that would reduce access to paid sick leave. Inadequate sick days are a public health concern that jeopardizes our communities.

By 2021, education workers had experienced a real dollar pay cut of almost 11%. [4] Since then, record-breaking inflation has further eroded workers' earnings. Education workers make $39,000 a year on average. This means many earn far less than $20 an hour. As a result, more than HALF of all education workers are juggling second jobs in order to make ends meet.

The more we “Paint the Province Purple” the more visible will be the public support, the more confident these workers will be to fight and win, and the better will be our public education system. And that will make it easier for all of us to win Justice for Workers.

[4] Why these Ontario educational assistants believe they deserve a raise, CBC.ca, October 6, 2022.