Historic opportunity to win status for all and paid sick days this summer!

We have a historic opportunity to win status for all this summer. Parliament has directed the Minister of Immigration to create a plan by September 8 to give permanent residency to low-waged migrant workers. At the same time, Prime Minister Trudeau asked the Minister of Immigration to create a “regularization program,” which means giving permanent resident status to undocumented people. Because the government is planning for both of these changes this summer, what we say and do now will have a real impact on their final decision.

There are an estimated 1.7 million temporary migrants in Canada.  That means one in every 23 people in Canada is a non-permanent resident. Unfortunately, there are only a few difficult-to-access immigration programs for some low-waged caregivers and farmworkers. Most migrants are excluded. And there has been no mass regularization program for undocumented migrants in Canada for decades.

Because of their precarious immigration status, temporary migrants are forced to work in some of the country’s most dangerous jobs. Yet they are paid the lowest wages with the least protection and with almost no government support. As Mariana makes clear:

“I left my country to save my life. Since coming to Canada with my daughter, I have searched many places to get help and information on how to get status here or claim refugee status. My 16-year-old daughter and I had no option but for both of us to start work, accepting exploitative working conditions through agencies because I have no work permit. We have suffered bullying from supervisors in the factories where we have worked. They pressure us because they know we come from an agency that uses undocumented people. During the pandemic, we were not allowed to apply for any government benefit. So we have to risk our lives and carry on working.”

Excerpt from: From the Frontlines: An urgent agenda for decent work

We can win status for all if we organize. Many forces don’t want migrants to have their rights. Bad bosses, landlords, private healthcare businesses and big colleges want to keep paying migrants less and making more money off of migrants. Anti-immigrant, racist groups also oppose positive changes. They will try to divide us and make us fight each other by pushing for small changes that exclude many and reward a few.

But we can win. Not just a partial, one-time TR to PR program, or a small regularization program but a transformation of the immigration system so that all migrants can have equal rights, well-paying jobs, and be with their families. 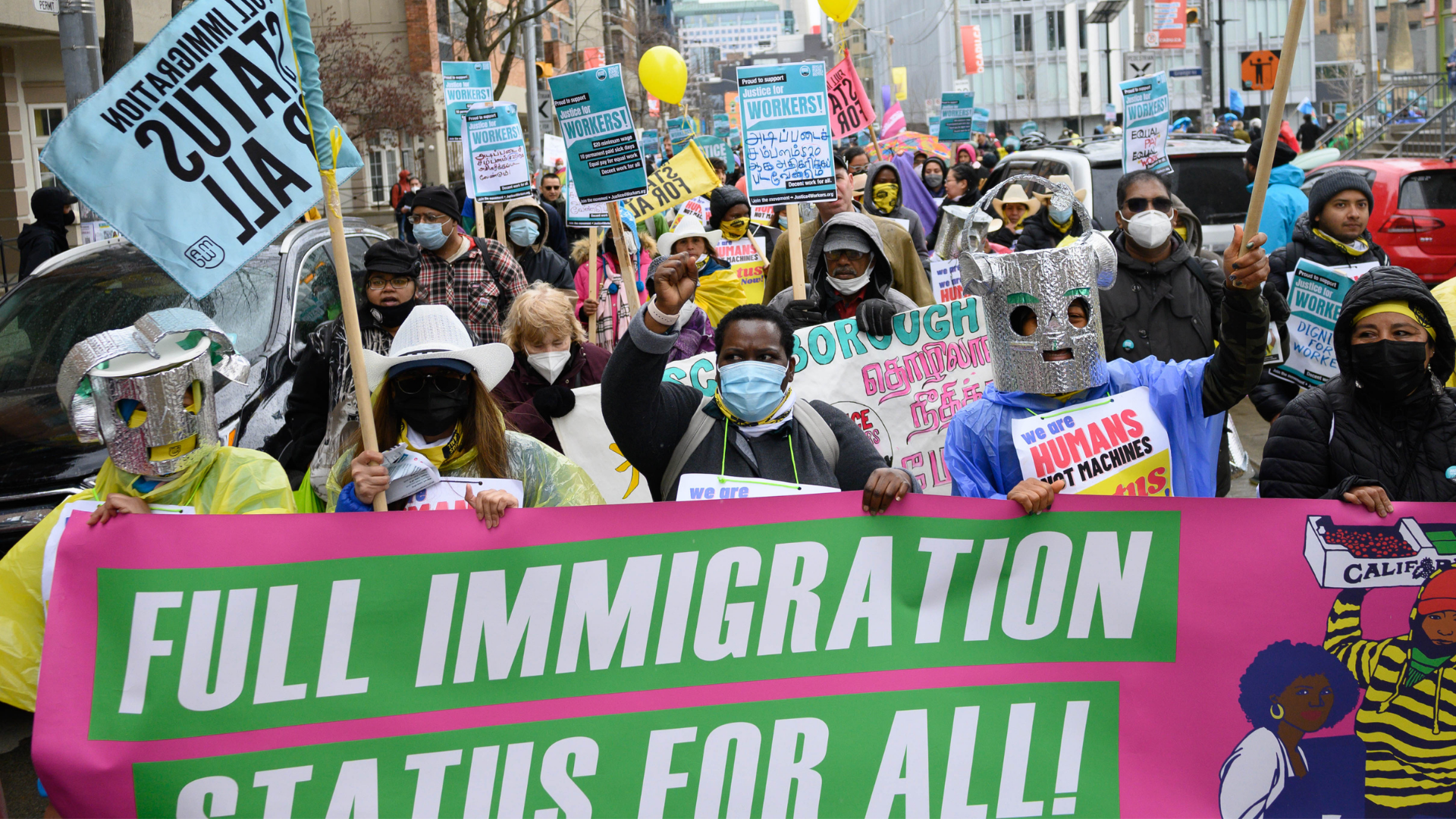 The Migrant Rights Network is also hosting online organizing meetings. The first cross-country organizing meeting is on Tuesday, July 5 at 4 pm ET. These meetings will be a great opportunity for you to learn more and plan actions in your community.

Can you join the meeting? Click the button below to RSVP and get the link to join online. 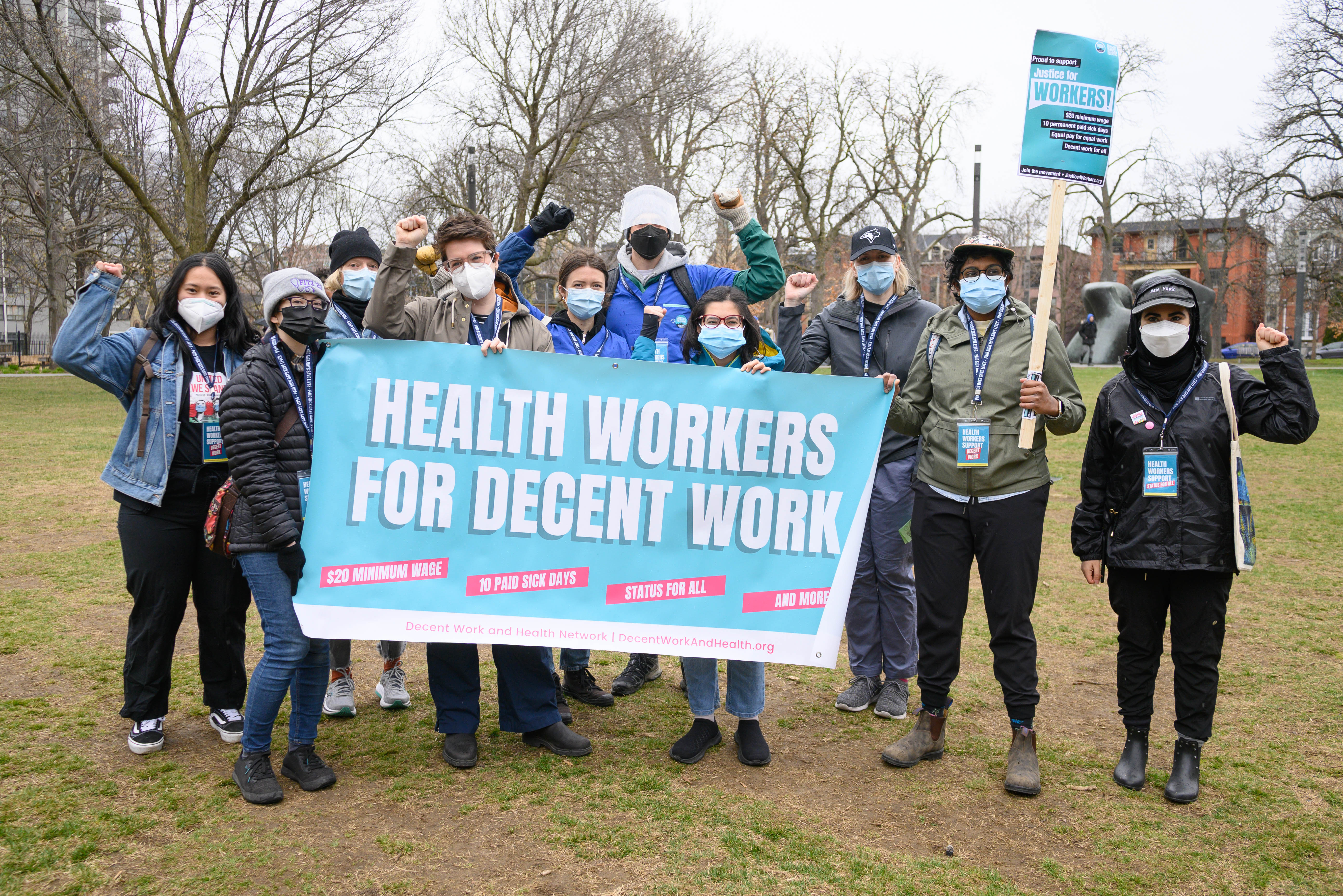 Rather than ensuring that workers have adequate protections, Ontario’s Labour Minister Monte McNaughton committed to extending the Worker Income Protection Benefit (WIPB) – for as long as COVID is in the province. But the WIPB falls short of what workers need:

We need the government to immediately legislate at least 10 paid sick days. To be effective, paid sick days must be universally available, immediately accessible without barriers, fully-paid by employers, adequate in number, and permanent.

Will you join the Emergency Phone Action on Tuesday, July 12? 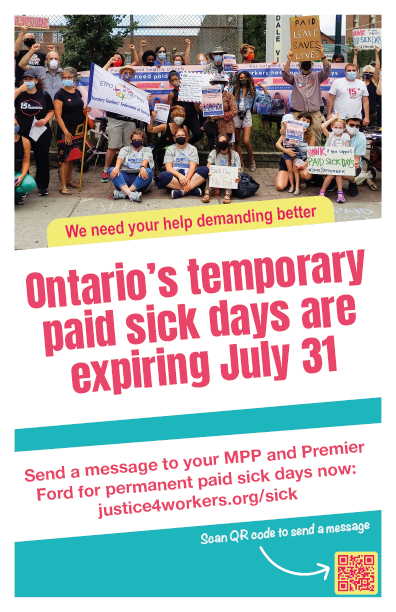 The devastating mercury crisis in Grassy Narrows First Nation has persisted for decades, ever since nine tonnes of mercury was dumped upstream in the 1960s, with little government action to help the people.

To this day, 86% of Grassy Narrows members got no compensation for the impacts of the ongoing mercury crisis on their health, culture, and livelihoods. To make matters worse, Ontario is now proposing mining exploration and industrial logging on Grassy Narrows lands against Grassy Narrows’ will.

At noon on Thursday, July 21 at Queens Park, walk with Grassy Narrows youth and community members to show that we are with them on their path to achieving mercury justice and freedom.

Check out FreeGrassy.net for more details as the event approaches.

Can we count on you to bring new folks to our next provincial meeting?

After August 23, we'll resume meeting every four weeks on Tuesdays at 7:00 pm. Please mark these upcoming dates in your calendars: September 20, October 18, and November 15.