Urgent action to stop the legalization of wage theft

Join us tonight (Tuesday) at 6:30 pm for an emergency phone action to stop Premier Doug Ford from passing legislation that will make it legal for Uber and other corporate tech giants to pay workers less than the hours they work, and deny them basic labour rights.

Can you join this emergency action tonight? 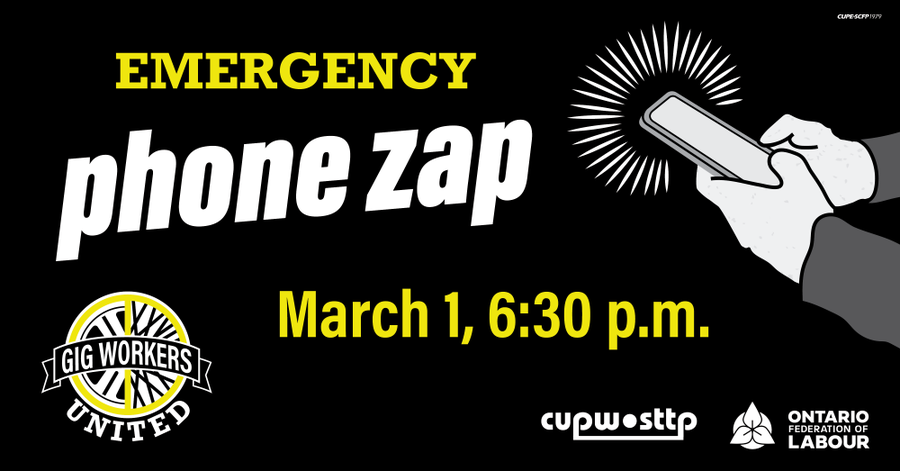 Too many gig workers are misclassified by the likes of Uber as “self-employed” to avoid paying their workers minimum wage, holiday, vacation and overtime pay. UberEats' wage theft was exposed at the Ministry of Labour just last week when an Employment Standards Officer ruled in favour of a courier who filed a complaint against the tech giant on precisely these grounds.

On Monday, Premier Doug Ford claimed he was standing up for gig workers by announcing legislation that will "give" gig workers a $15 gig worker minimum wage. But workers should already be getting the $15 minimum wage. That so many gig workers are not reflects the failure of this government to address illegal misclassification.

In practice, Ford's Bill will cut gig workers wages in half, while still denying them their rights as employees such as holiday, vacation and overtime pay.

Ford's legislation only ensures gig workers are paid for the time they are making the delivery–not when they are returning from or waiting for a delivery. So instead of standing up for workers, Doug Ford is again standing up for corporations by legalizing wage theft.

To make matters worse, the Bill also introduces two new carve-outs where more workers can legally be denied full protection under the Act.

If you can't join us tonight for the emergency phone action, read on for two meetings where you can support gig workers and the fight for decent work.

Justice for Workers is excited to be mobilizing for the May 1 Day of Action called by the Ontario Federation of Labour. We want to demand a workers’ first agenda that includes our decent work demands, as well as housing, health care, child care, education and more.

We hope you can join labour and community allies to fight for decent work, build solidarity with gig workers, and make sure we elect decent work champions in the June 2 provincial election.

RSVP here for the Zoom link

Join us for our online organizing meeting where we’ll discuss the next steps in the fight for decent work. We’ll be having a breakout room specifically dedicated to solidarity with gig workers, as well as other breakout groups addressing everything from paid sick days to the $20 minimum wage.

RSVP here for the Zoom link

Thank you for all you do in the fight for decent work. Hope to see you soon!