No time to wait, status for all now!

Migrants, including refugees, care workers, farmworkers, undocumented people and international students, will be taking action for immigration status for all on June 20 at 1 PM. A year-long campaign led by the Migrant Rights Network has led to creating a new pathway to immigration program -- but the new program is woefully inadequate. As a result, the vast majority of working-class, racialized and particularly undocumented people are shut out of permanent resident status. They live here without income support, workplace rights and even access to healthcare during the pandemic.

Before or on June 20, take a photo with your family and post a message to Justin Trudeau: Unite All Families! Status for All!. Make sure to tag @MigrantRightsCA in your photo. 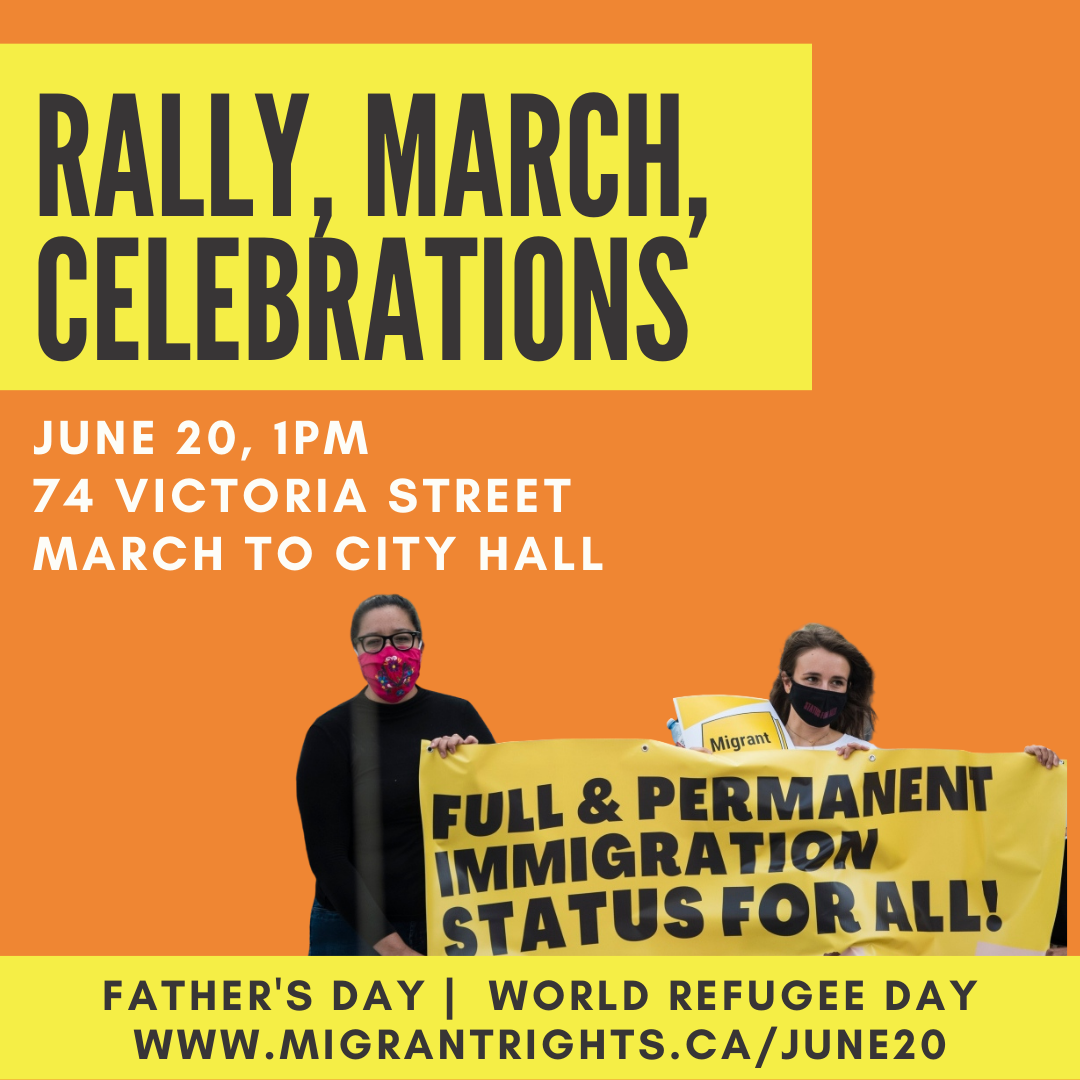 Carlo Escario is a Filipino healthcare worker who has been on the frontlines throughout the pandemic but is at risk of being deported to the Philippines on June 22. With public pressure, Carlo and his family were able to postpone the original scheduled May 13 deportation. However, Carlo is still in imminent danger of deportation unless immigration Minister Marco Mendicino intervenes. From farm workers to health workers, migrant workers continue to put their lives on the line in Canada providing the services and skills we all rely on, only to face deportation.

Click here to take action. And please be sure to support the Migrant Rights Day of Action on June 20.

The federal budget proposes to cut the Canada Recovery Benefit (CRB) by $200 per week. That’s a staggering 40% cut to vital income support that nearly one million workers depend on. At $500 per week before taxes, the CRB fails to provide even with the equivalent of minimum wage. A 40% cut will be a catastrophe for workers and the economy.

It’s not too late to stop this cut! Will you send a message right now to Prime Minister Trudeau, Finance Minister Chrystia Freeland, and your own member of parliament? Click here to send a message today.

If the budget passes as is, the CRB cut will be scheduled to take effect on July 17 - just four weeks from now.

Meanwhile, the economy is nowhere near recovered from COVID 19. Unemployment and joblessness remain at record levels, with Black, Indigenous, Racialised and Newcomer workers are hit especially hard and more likely to depend on the CRB.

That’s why, in addition to sending these crucial emails, we are also calling an emergency phone action for Wednesday, June 23 at 5:00 pm.

Join us as we make urgent phone calls to the Prime Minister, Deputy Prime Minister and your own Member of Parliament. Click here to RSVP right now, and bring a friend.

We will all be keeping a close eye on the federal budget. If the budget is passed with the 40% cut to CRB, the Justice for Workers campaign will be calling for an emergency day of action. Keep your eye on your inbox for more updates in the coming weeks. 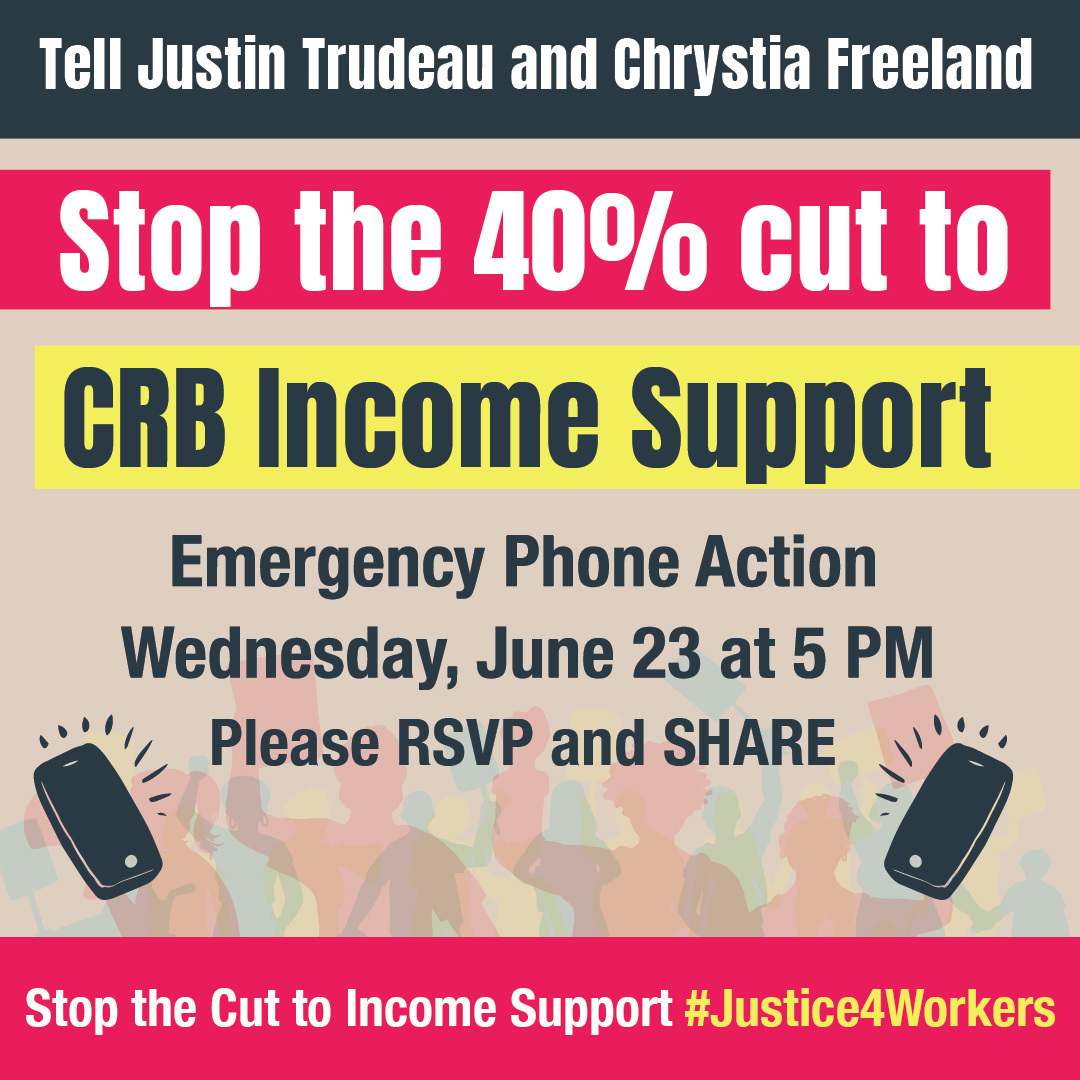 As the weather heats up, so does the fight for decent work! Let’s get organized and hit the street!

Across Ontario, we’re getting organized and ready to reach new people in our communities! We have a fresh new petition calling on the Ontario government to ensure paid sick days, a $20 minimum wage, and other crucial changes to ensure decent work for all.

Check out the toolkit for action here. 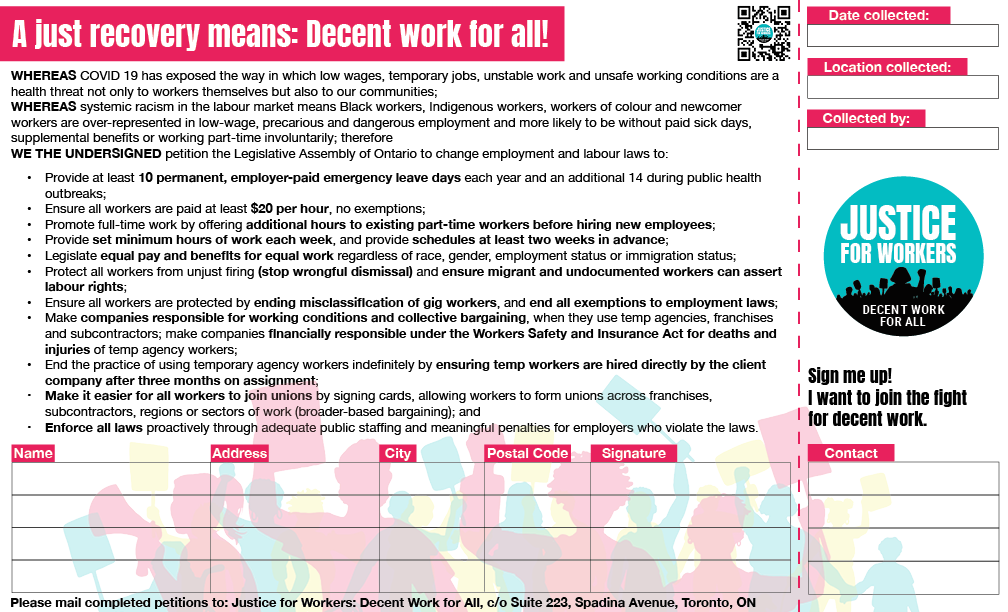 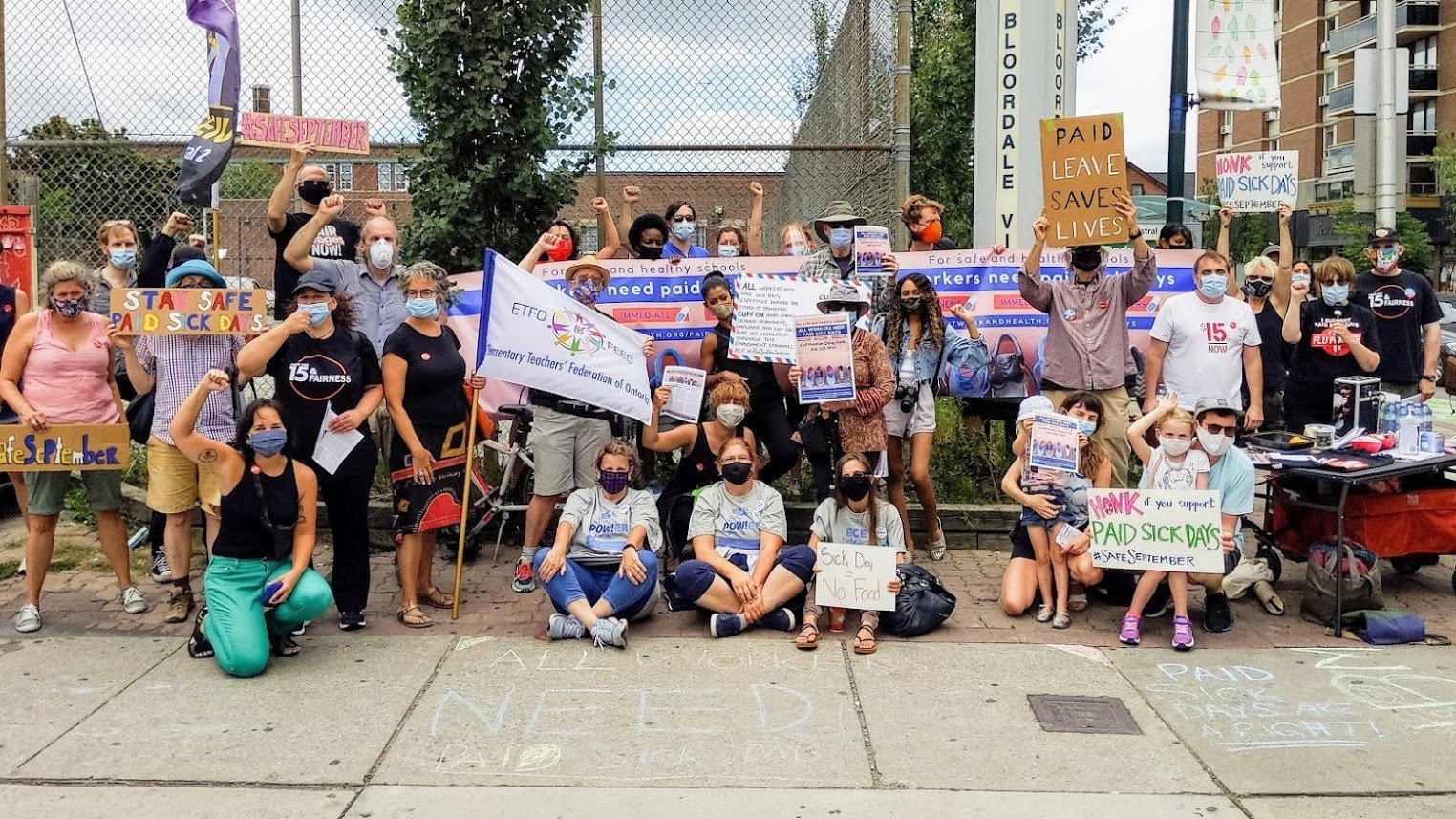 Ready to hit the streets in your community, but don't see an action? 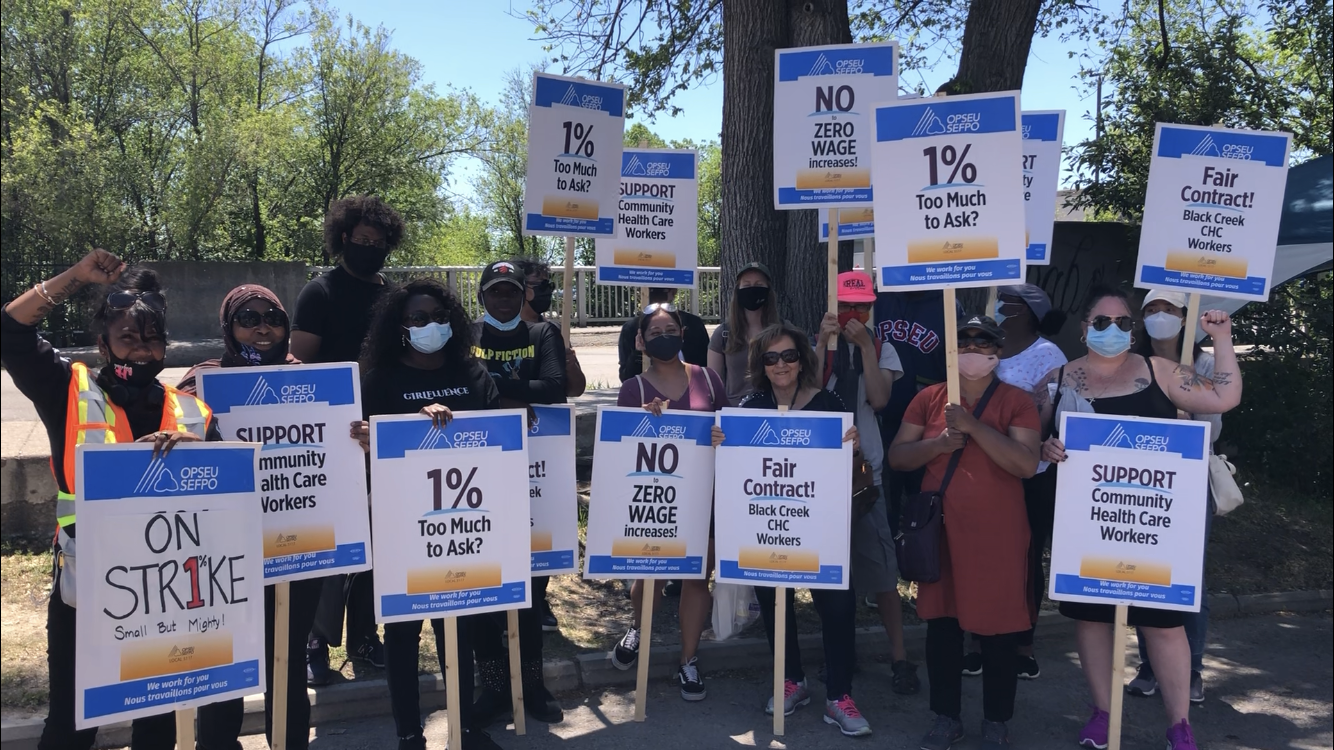 The Black Creek Community Health Centre (BCCHC) workers provide a vital service to the Jane and Finch/Black Creek communities that extend beyond healthcare. The workers have been forced on strike for fair wages. Under Bill 124, all public sector workers are entitled to a wage increase of up to one percent per year (up to a total of three years). Still, their employer denies them even this modest increase in wages.

Click here to send a message to Minister of Health Christine Elliot and the BCCHC Executive Director Cheryl Prescod. You can also show your support for these workers by joining the picket line at 2202 Jane Street in Toronto.

To support Wine Rack workers, please follow their call to boycott Wine Rack stores during the strike. Follow SEIU Local 2 for updates and find out how and where you can support their picket lines in Toronto.

You can also join the Solidarity Rally for Wine Rack Workers this Saturday, June 19, from 1 PM to 3 PM. Please RSVP and share on Facebook.

35 Rexplas workers - who are predominantly racialized women – have been on strike since April 26, asking for nothing more than decent wages and respect on the job. They have worked throughout the pandemic and many earn just above the minimum wage and commute long hours on public transit to get to work. Some have worked at the company for more than 30 years. Rexplas (Richards Packaging Inc.) made record profit during the pandemic while denying workers a livable wage.

You can support these workers by sending an email to Rexplas (click here) and join their picket lines at 500 Burmac Dr, North York, ON, M9W 2X8 or 6095 Ordan Dr, Mississauga, ON, L5T 2M7.

Since May 1, 24 nurses employed by the Victorian Order of Nurses (VON) have been on strike for a fair contract. These workers care for medically fragile students in schools and patients at home. They have been without an agreement since April 2019. The workers have been calling for a one percent wage increase as per Bill 124. In addition to fair wages, these workers have been calling for paid sick leave, health benefits, bereavement leave and fair overtime compensation.

Toronto - June 27 at 12 PM Pride March and Rally: We Must ‘Change Everything’: Creating Liveable Queer, Trans and Two-Spirit Lives without Police and Prisons

One year after the historic call to defund and abolish police in response to the horrific acts of violence targeting Black and Indigenous people, the No Pride in Policing Coalition (NPPC) is holding a Pride March and Rally on June 27 starting at Nathan Phillips Square. The action will be live-streamed. Please check out the NPPC event page for more information (Click here). 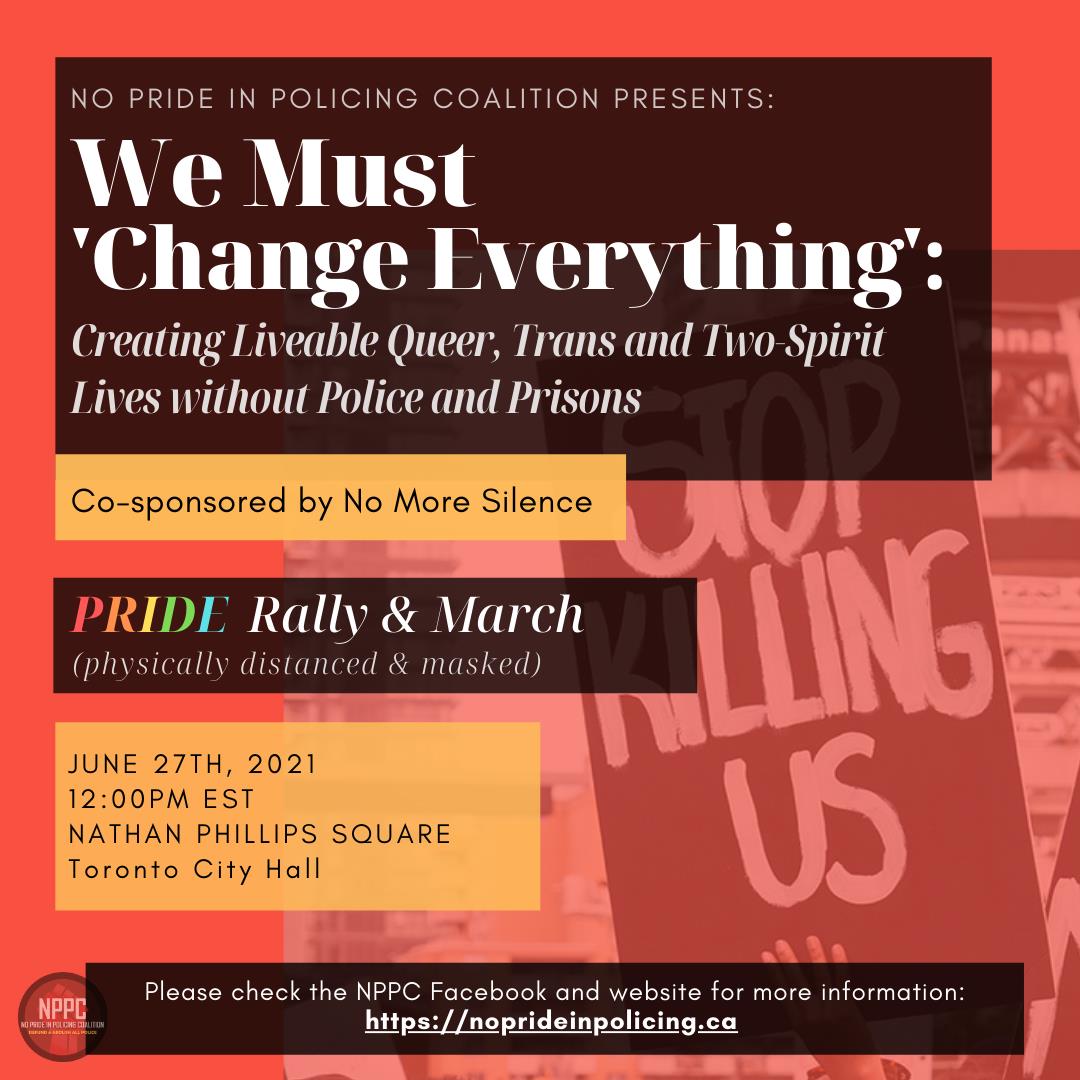 The year ahead will be crucial. We need to organize now to make sure we elect a provincial government that will put workers’ needs before corporate profit. We have less than a year to talk to - and organize - as many workers as we can across the province.

But doing all this requires financial resources that we don’t yet have. We need to produce and distribute more material and we urgently need more staffing infrastructure to support local organizing.

You can make a huge difference by becoming a monthly donor to the Justice for Workers campaign. A monthly contribution of just $5.00, $10.00 or even $20.00 will help generate steady income and allow us to make the crucial investments we need to win.

Thanks in advance for any amount you can contribute.

And of course, thank you for all your ongoing solidarity. We are making a difference in the fight for decent work -- and it's because of you and everyone like you.